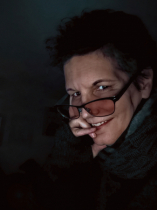 Karen is well educated. She received a National Science Foundation grant to study environmental science. She holds an undergraduate degree in Geoenvironmental Science. She also holds a Masterâs degree in Counseling Psychology. She held certification in Addiction and Crisis Management. She is published in the field of Crisis Management. She has received some 70 plus awards for her work: Most notables: 2002, she had an original art piece published in The Advocate. Karen has won competitions: National Wildlife, Ritz camera, Canon camera. 2006, Karen exhibited a piece at the Open Door gallery, Florida. Three pieces of her work began a four year traveling exhibit with Great Explorations Childrenâs museum, St Petersburg, Florida. She also became involved with Art in Embassies: State Department. 2011-2019 Karen received 10 nominations and earned the Merit of Excellence in The Spider Awards. 2019, she donated her time and talent to the Philadelphia Orchestra Musicians day of Audience Appreciation Day. In 2020, Karen, once again, donated her time and talent to Congregation Rodeph Shalom. She provided her photographs of the building, along with congregational president and architect Michael Hauptmanâ s commentary. She also earned another nomination by the Spider Awards for architecture. Sound canceling headphones and looking through a lens Make her world manageable. Enjoy the selected works.